Update: 5 Lawsuits to Protect the BWCA 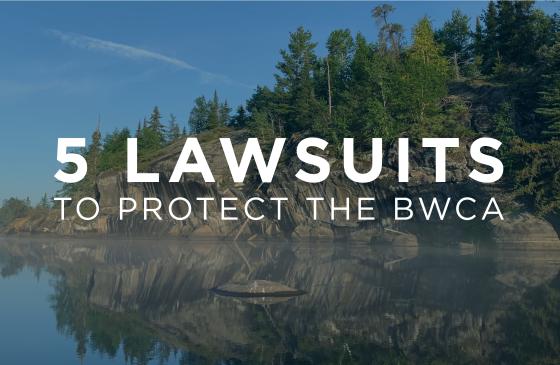 Today, the Campaign to Save the Boundary Waters, with two other conservation groups, the Center for Biological Diversity and The Wilderness Society, filed a lawsuit challenging the Trump administration over its decision to renew 13 prospecting permits that could lead to an expanded Twin Metals sulfide-ore copper mine.

Any sulfide-ore copper mining in the watershed of the Boundary Waters would cause irreparable damage to America’s most visited Wilderness. This isn’t just our opinion, but also the conclusion of the U.S. Forest Service.

The renewed prospecting permits allow Twin Metals to drill exploration holes, build roads, and do other mining exploratory work throughout more than 15,000 acres of Superior National Forest. The goal of Twin Metals is to find additional mineral deposits and to expand its proposed mining project. Altogether the renewed permits extend well beyond the geographic footprint of the proposed Twin Metals mine. The area covered by the renewed permits extends south along Birch Lake and east to the very edge of the Wilderness. All are within within the watershed of the Boundary Waters and within the headwaters of lakes and rivers that flow into the Wilderness.

The Bureau of Land Management, in deciding on May 1 to extend the prospecting permits for four more years, failed to consider how Twin Metals’ mine plan, mineral leases and permits could harm the critical resources of the Boundary Waters and its watershed. The Bureau also failed to consult with the U.S. Fish and Wildlife Service over potential harm to three federally listed endangered species and their critical habitat: Canada lynx, gray wolves, and northern long-eared bats.

This is the fourth lawsuit the Campaign, working with conservation partners, has filed in response to the Trump Administration’s continuous attacks on the Boundary Waters Canoe Area Wilderness. Critical decisions are being rendered without consideration of scientific and ecological knowledge and  without public notice or input.  The proposed Twin Metals mine project has been resurrected from the dead, while bedrock environmental laws and regulations are being rolled back, weakened, or eliminated - risky sulfide-ore copper mining in the  headwaters of the Boundary Waters is being fast-tracked.

Under the Obama administration, federal officials terminated Twin Metals mineral leases because the U.S. Forest Service concluded that sulfide-ore copper mining in the headwaters of the Boundary Waters was risky and threatened irreparable harm to the Wilderness - harm that could never be fixed or mitigated.

With this new lawsuit, there are now FIVE LAWSUITS in the state and federal courts related to protection of the Boundary Waters. Here’s a bit of a primer and reminder on the other lawsuits:

Check out the recording and slides from our August 13 town hall where we heard from Save the Boundary Waters Campaign National Chair Becky Rom and Alison Flint, Senior Legal Director for The Wilderness Society, about how we are working together to protect the Boundary Waters.