From the Freemans: Metamorphosis

While camped on Horseshoe Lake, we prepared to accompany our latest resupply crew to the portage to Gaskin Lake and noticed several dark shapes attached to our canoe. At first glance, it was obvious that they were dragonflies. Someone asked what they were eating and it was apparent that the insects had latched onto something. Upon closer inspection, we realized that they had recently undergone metamorphosis. They emerged from their nymph exoskeletons and were hanging off of our canoes, drying out and stretching their wings. 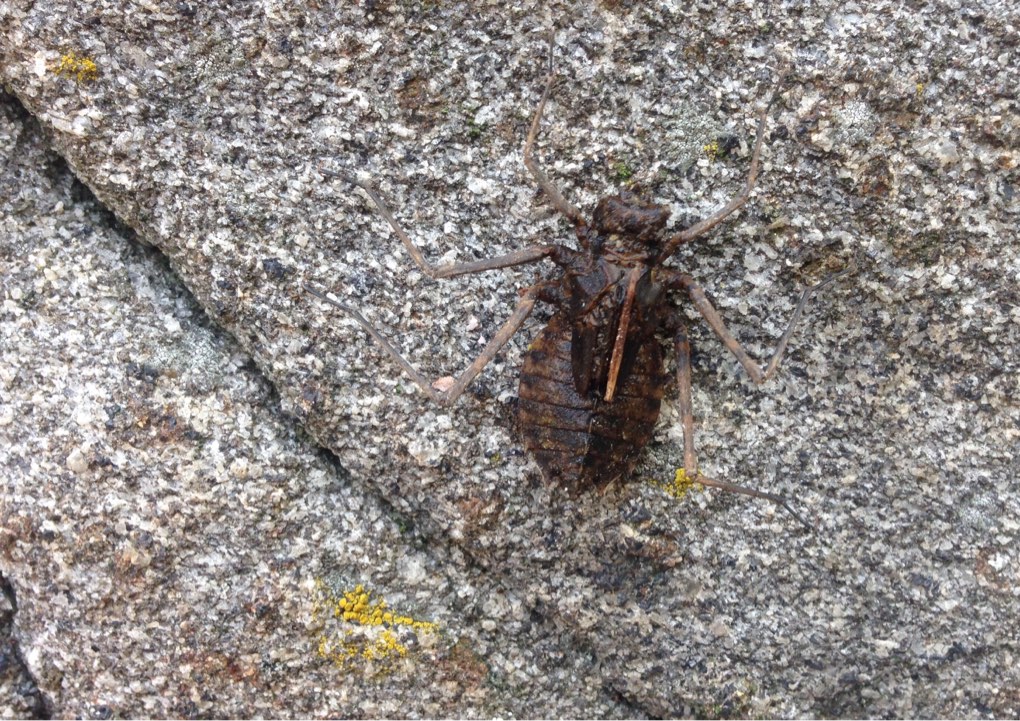 Suddenly, everyone was engrossed– taking pictures and delicately transplanting these bizarre creatures in their vulnerable state from the sides of the canoe to nearby rocks and vegetation. While Michelle, J.B., Jessica, Tim, Katie, Denny, Dave and I are adults, we were all acting like kids as we marveled at one of nature's many little miracles. The only kid in the bunch, ten month old Jasper– our youngest overnight visitor, was also transfixed.

Over the next few days we watched this process unfold multiple times, from the moment when the dragonfly first pops its head out of its old body, to the moment when it takes flight for the first time. Every summer I rejoice when I spot the first dragonflies flying around, because I know that they will eat some of those pesky black flies that leave such a vicious, itchy bite. The past 48 hours have given me new respect for dragonflies. According to this article in Smithsonian Magazine: "A single dragonfly can eat 30 to hundreds of mosquitoes per day." 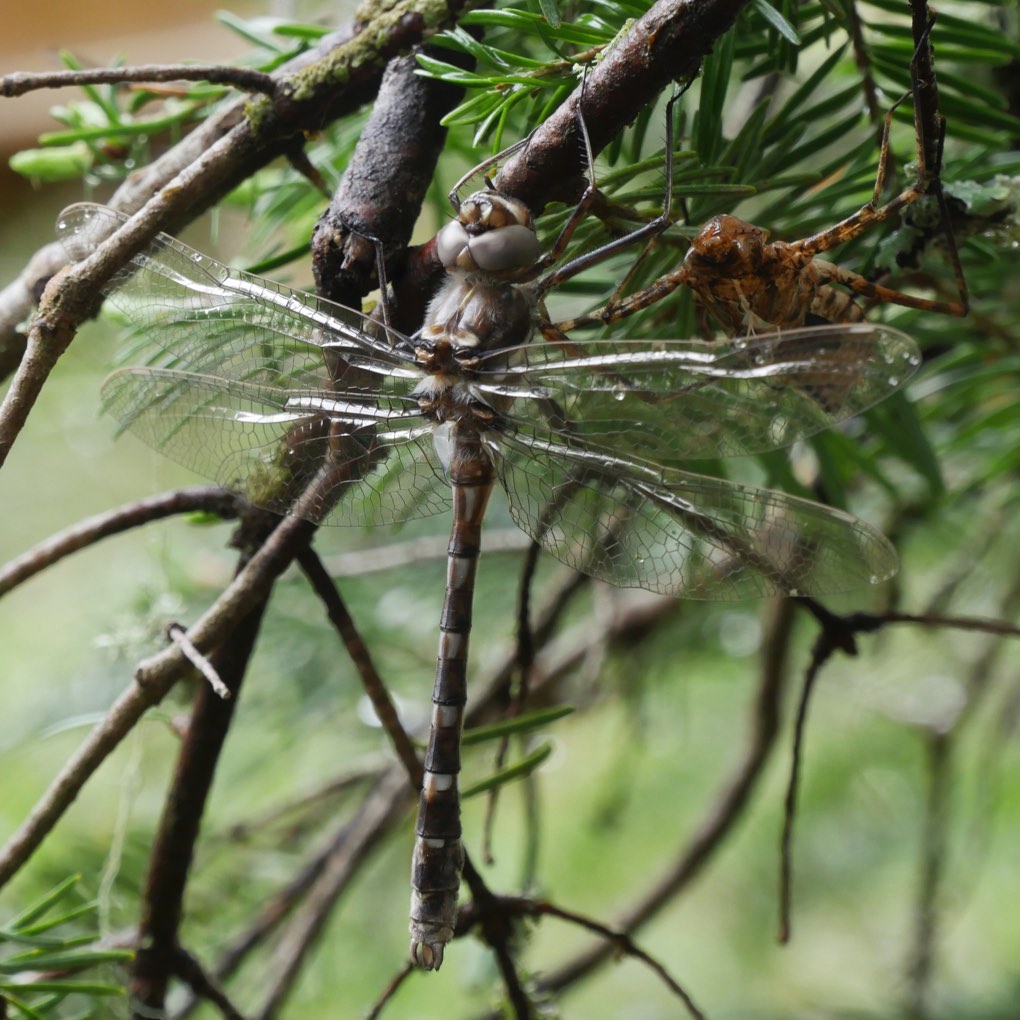 A dragonfly spends most of its life in nymph form, creeping along on the lake bottom. Many species of dragonfly spend several years living as nymphs. We have been lucky enough to be in the right place at the right time to see these primordial looking creatures emerge from the water, crawl across the forest floor and then in an upward direction. "They look like little monsters," was one observation. These dragonfly nymphs are large– and they would play the part of scary alien invaders in a sci-fi movie well if they were closer to us in size.

We've found that they settle in a spot with a slight overhang, firmly latched on, so that their new bodies can take advantage of gravity. This is why the side of our overturned Wenonah Itasca canoe was an optimal surface. We've also spotted them on the trunks of cedar trees, balsam branches, rocks, and the guy lines for our Cooke Custom Sewing Lean shelter.

First the head and legs emerge. It may shift position a little to get in the optimal spot to allow its wings to hang down. The wings are barely noticeable at first, plastered to its body. Slowly they appear to grow. The dragonfly's abdomen appears to grow too, because it emerges wide and stubby, but slowly lengthens and narrows. Eventually the dragonfly spreads its wings for some final drying in the sun and breeze. You might miss the moment when it takes flight if you're not looking carefully. 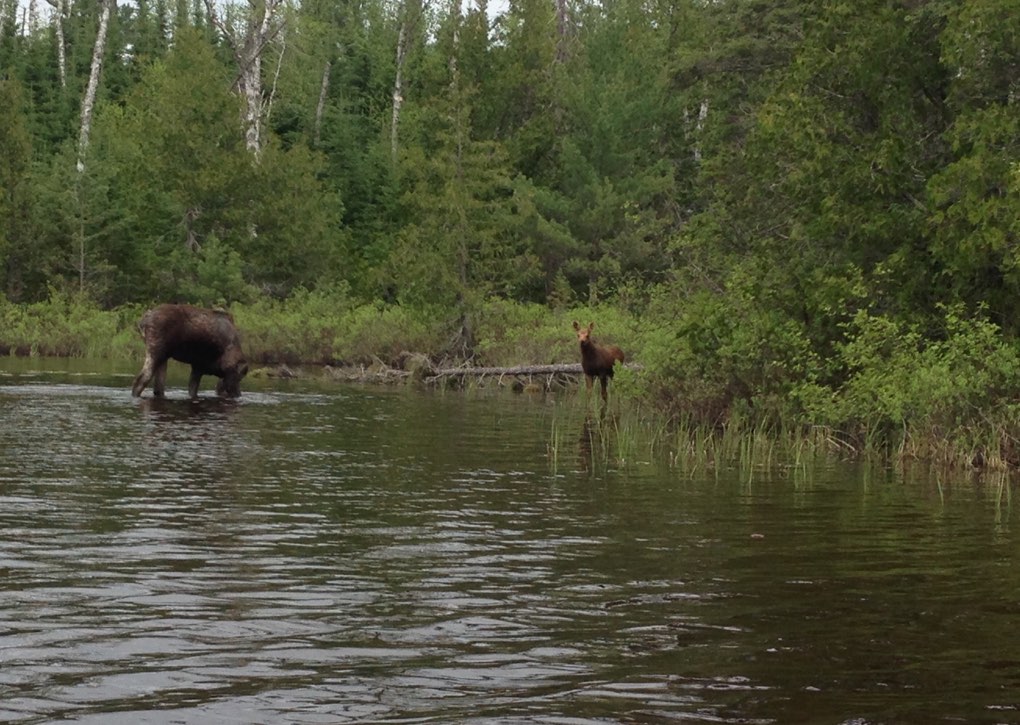 Just today, as Dave and I were returning to Horseshoe from Vista Lake, we were hugging shore due to the significant east wind. I caught a glimpse of a large brown body several yards ahead and controlled my excitement enough to whisper to Dave, "there's a moose ahead." We veered out from shore a little and were able to watch a mother moose and calf wading in the water. The mother was engrossed in munching on aquatic vegetation, stocking up on necessary nutrients to feed her young one, as we silently glided by.

What does one the BWCAW's biggest creatures have in common with one of its smallest? Both the moose and the dragonflies depend on clean water for their survival. While a dragonfly spends most of its life in the water, a moose depends on the plants that grow in the water as a food source. Although most humans inhabit cities and towns–-and are quite oblivious to the source of our drinking water beyond knowing it flows out of the kitchen sink–-we need this clean water just as much as the moose and the dragonflies. 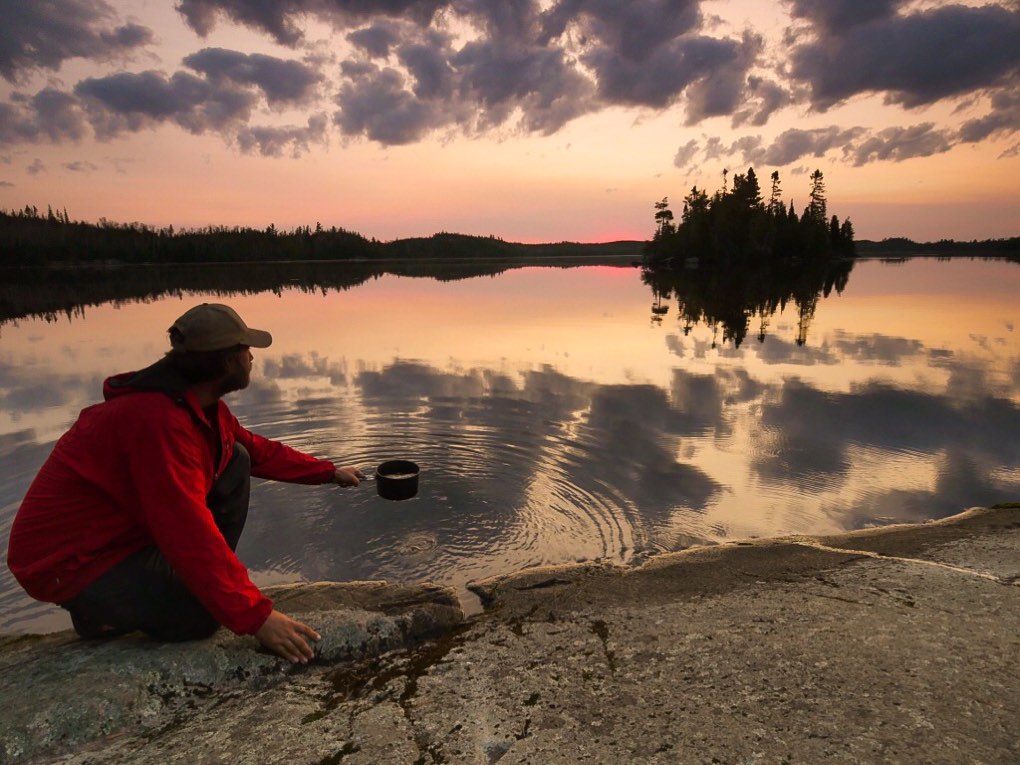 We're pretty darn fortunate that this vast tract of wilderness–-a 1.1 million acre landscape that is effectively half land and half water–-remains unpolluted. How about we keep it that way? Mining for copper in a sulfide ore body along the edge of the BWCAW is simply not an activity that is compatible with this water-rich environment. If you feel the same, join the movement. Please take a moment to sign the petition. Be sure to let your local elected officials know how you feel. And if you have a favorite Boundary Waters moment, feel free to share it here.