Author Kevin Proescholdt has guided canoe trips in Minnesota's 1.1 million-acre Boundary Waters Canoe Area Wilderness for 10 years, and has visited designated and undesignated Wildernesses throughout the U.S. and Canada.

Set in Minnesota’s canoe country, Proescholdt’s book, Glimpses of Wilderness, details the author’s insights into nature and the value of wilderness areas in thirty eloquent essays. In the chapter "Wilderness Trail," Proescholdt describes a powerful meeting with a moose and reflects on the history of wilderness preservation while canoeing in the Boundary Waters late one spring evening.

I shared a trail one day in the Boundary Waters, not with another person but with a moose. It had come by earlier in the day, and had left its large cloven prints in the mud and duff. I came by much later, near sunset, after spending the entire day exploring a lake and the large waterfall that fed it, near a place that had once threatened the wild character of this land years ago.

After a long winter away, I had returned to the canoe country north and west of Lake Superior. I had come in early May by myself, to capture the feel of the land just after the break-up, to gaze down the long vistas of a special lake that haunts my memory, and to experience the pure joy of wilderness travel by canoe. I had done these things and more, and now had begun to head back, satisfied with this time in my favorite land now empty of humankind.

The water stood high in the lakes so soon after the melt, and the shorelines of the lakes I paddled had flooded, glaciated spits of rock had submerged and shoreline trees and shrubs were left standing in water. As I neared the portage landing, the low western sun glaring in my eyes, the familiar spot had gone - the rocky shelf and tiny curve of sand had disappeared. Had I not crossed this spot several times before, I would have remained perplexed, but suddenly realizing the inundated situation I began paddling my canoe inland between the flooded alder and hazel brush. After nearly 10 rods, I saw my portage trail rise out of the water in front of the canoe.

Since this portage trail ran a long distance - a mile in length - and my one large pack weighed considerably, I decided to split the load and carry it as the French voyageurs had done - in poses or half-mile segments. I set off with my pack through the aspen and spruce woods. Immediately I saw the tracks of the moose. We were the first to walk the trail this spring, the moose and I, for only our tracks disturbed the surface of the trail.  I stopped a moment to examine a particularly distinct track in the mud. The moose was large, I thought, perhaps a big bull, and it had walked this trail just earlier today. As the trail wound through a stand of aspen, the level rays of the sun highlighted every track the moose had left in the disturbed leaves on the trail. Finally I came to a good stopping point near an old beaver flowage, and I dropped the pack to return for the canoe.

I soon returned to my pack with the canoe and discovered around the corner that the trail - normally passable at this point - ran into standing water. The moose tracks disappeared under the water along with the trail. I loaded the pack in my canoe and began paddling along the “trail,” now several feet below my canoe. An eerie feeling came over me as I paddled along, trying to remember where the trail led among the tall branchless dead snags that had drowned long ago. Red-winged blackbirds flew noisily at my approach, surprised by the intrusion. A pair of blue-wing teal swam quickly away. 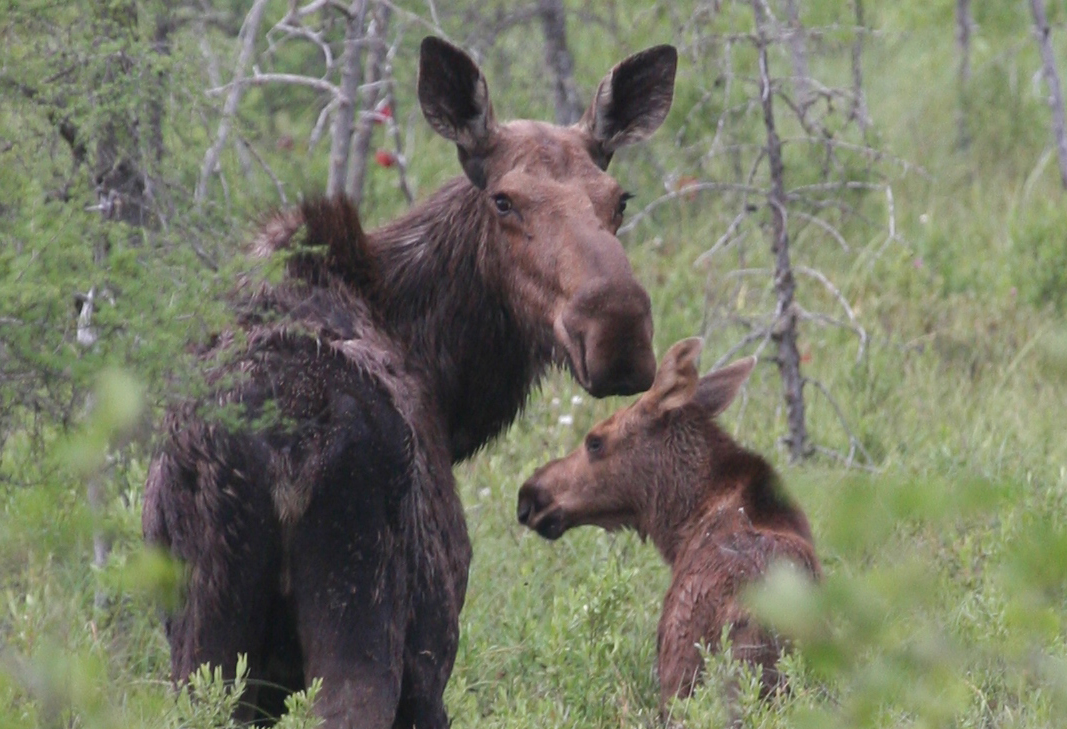 Then, near the far end of the standing water, I heard sloshing in the water. As my canoe glided soundlessly closer, at last I could see the source of the noise - the moose from the trail! He fed in the shallows, a large bull around six feet tall at the shoulder and weighing perhaps a half-ton. His antlers had not yet grown much this early in the season, each velvet-covered antler about 15 inches long and completely horizontal, with a palmate knob at each end.
[Photo of moose and calf courtesy of Dave Freeman]

Inadvertently I made a small noise and suddenly alerted the moose, with his keen sense of hearing, to my presence. We both froze, motionless, the moose and I, waiting to see what the other would do. For long minutes we stood that way, he in the water and I in the canoe.

At long last the moose began moving off, breaking the tense silence with his sloshing in the water. As he reached a more distant spot he turned to eye me once more. First he snorted, then bellowed - not once but four times, as if to show his displeasure with my interruption. Our meeting noisily terminated, the moose headed through the swamp to the north and I returned to paddling the trail.

The sun had set now, and as I paddled ahead trying to pick out the trail through the flooded dead trees, my thoughts jumped ahead to the campsite I wanted and the routine chores awaiting me there: pitching my tent on the carpet of needles under the tall red pines, preparing and eating a simple supper, and luxuriating in the sounds and smells of another evening in the canoe country.

During this time out I had caught the rhythms of the land during the excitement of early spring, had shared my quiet and solitude with moose and warblers, bald eagles and beavers. I had visited places of great beauty and hidden history, and had captured a feel for the battles this land had seen. I mused on and searched the dusk for signs of the flooded trail.

As I peered through the fading light I realized that my experience on the trail today reflected much of the long history of the efforts to protect the canoe country. At times during the past century the route to long-term preservation of the area has been level and straight, at other times flooded with threats, at still other times fraught with conflict and confrontation. Though we have made great progress over the course of that trail, a great distance yet remains before we find the humility and exercise the restraint to grant the Boundary Waters the full wilderness protection it so richly deserves, free from motorized intrusions of all kinds, safe from all threats, and preserved as a rich wild, untrammeled legacy for all generations.

At last I found the portage emerging from the waters of this embattled wilderness and landed the canoe where the trail climbed to dry ground. I grunted as I threw the canoe to my shoulders and stared ahead at the long uphill path before me. How far must this path go? My goal awaited me in the dusk on the far side; I headed up the trail.