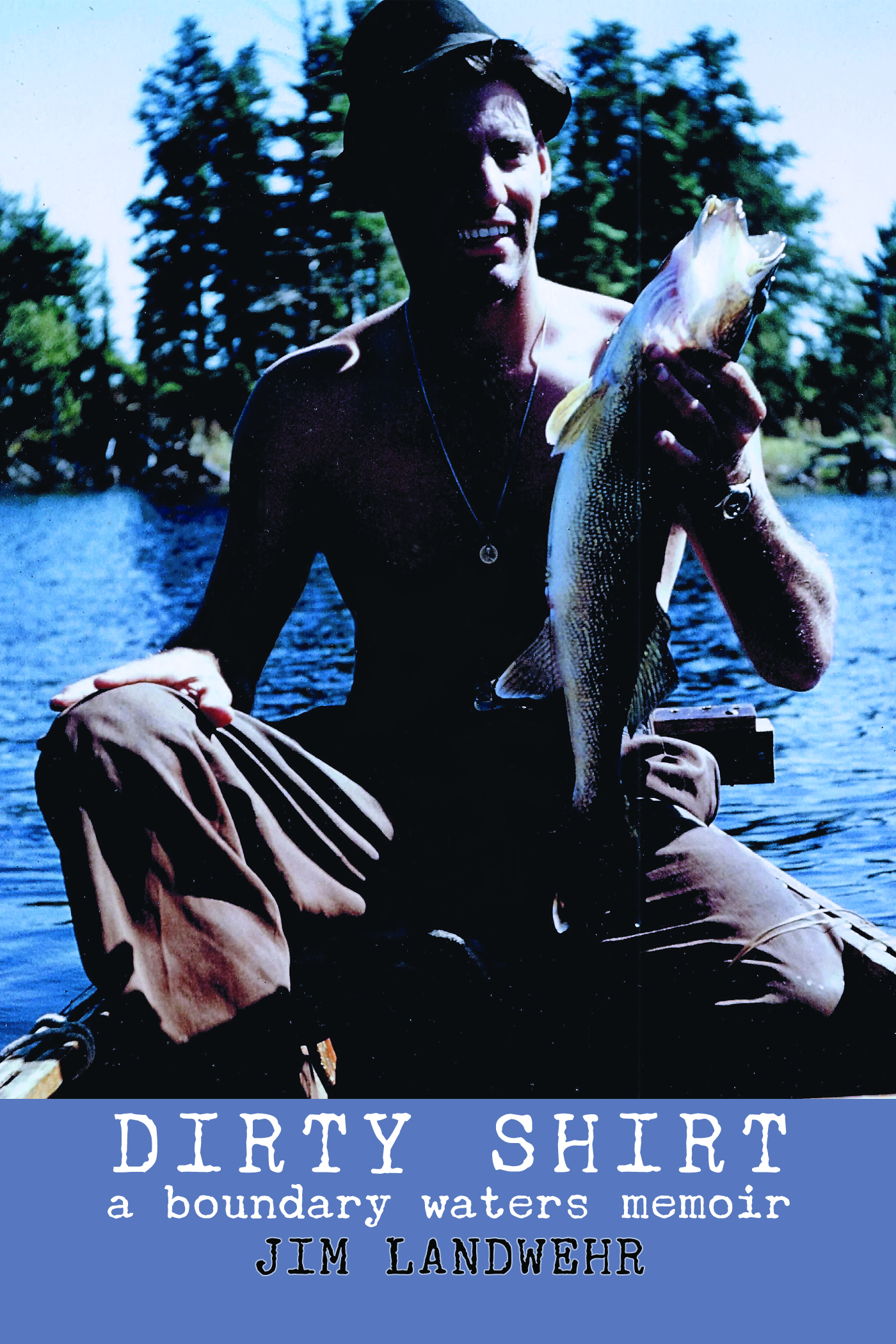 Author Jim Landwehr grew up in Minnesota and took his first trip to the Boundary Waters Canoe Area in 1979. That trip during high school was a disaster. “We did pretty much everything wrong,” says Landwehr, “but the area was captivatingly beautiful and serene. The following year a friend and I repeated the same exact trip with a much better outcome. I was hooked and have been taking trips up there on and off over the last 25 years.”

Landwehr’s book, Dirty Shirt: A Boundary Waters Memoir splits his Boundary Waters memories into three parts. He first shares his early trips with friends and then chronicles adventures with his brothers and friends in the 1980s and 1990s. Finally, he takes a look at how, 25 years later, he’s now taking his kids up there and passing on his love of the area to the next generation. He’s already got a trip on the books for this June. “The last time we went up, it was refreshing to see the kids with no access to phones, tablets or technology,” he says. “They had a blast creating their own fun while fishing, paddling and even playing card games in the tent during a rainstorm. These trips have instilled a love and respect for the area in them that I hope they then pass on to their children.”

“The Boundary Waters is one of America’s greatest untouched wilderness areas,” says Landwehr. “It is a place of beauty, serenity and restoration. The lack of technology, noise and people make it one of the best refuges from the frantic pace of the world that I can think of. When I’m there, it grounds me.” Landwehr feels so strongly about the value of the area that he donated part of his book sales to a Minnesota nonprofit dedicated to protecting the Boundary Waters. He appreciates the importance of advocating for keeping the “wild” in wilderness.

Below is an excerpt from Dirty Shirt: A Boundary Waters Memoir.

Part of the beauty of the Boundary Waters is that in the more remote areas, you can paddle for days without seeing another soul. Getting to those areas requires portaging between water bodies. This involves transporting your boat and gear across short, and sometimes not so short, stretches of land. The terrain, trail conditions and how well you packed often determine your experience. For the most part though, it is not for whiners or slackers. Having participated in enough portages, I’ve drafted my own definition of portaging you won’t find in Webster’s dictionary and it goes as follows:

It is hard, sweaty, thankless work.

The portaging experience begins with you and your canoe buddy deciding who gets to hoist the canoe overhead and carry it to the other side. Because we usually went three or four portages deep on each trip, we alternated who would take the canoe and who would take the packs and other gear.

The process of loading the canoe ranges from a thing of beauty and grace to one of an Olympic sport gone bad. The canoe hauler began his hoist by centering himself on one side of the canoe where the shoulder padded yoke was. He grabbed the yoke at the opposite side from where he stood, took a deep breath and lifted the canoe so that the near-side gunwale rested on his thighs. From there, using a turn and bench-press type motion, he lifted the yoke over his head and set the pads on his shoulders. This sometimes resulted in the stern or bow banging on the ground as the handler struggled for control. What was intended as a one-two-three step motion often turned into a four-five-need some help here-six motion. Eventually though, liftoff was achieved and the canoe-bearing Sherpa began his trek.

While loading the canoe on our shoulders was always a treat, walking the actual portage trail was when the real fun began. It wasn’t so bad when we were moving the canoe across those short, flat, straight stretches we rarely encountered. It was those hilly, rocky portages strewn with ankle-turning roots that made us question our use of vacation time. Portages which we swore were cut by drunken, practical joking Forest Service employees designed to weed out the weak and uncommitted.

Some of the longer portages even had two or three canoe “rests” along their length. These were locations where some merciful worker fashioned an overhead hook where people could set the canoe to regain the feeling in their shoulders and perhaps receive CPR or stress counseling. There were a couple of these rests where, by the time we got to them, we were seeing visions of the Virgin Mary, Jerry Garcia and Elvis. Trails like these were life changing.

Hilly portages required a great deal of strength, grace, and balance. A third lung helped too. Walking up or downhill with a sixteen-foot aluminum teeter-totter on your shoulders is not for clods or the weak. Occasionally, as we descended a hill, we forgot to watch our stern, and the back end would bang on the rocky trail. If you were the second or third canoe in a train, you just followed the noise in front of you and traveled by sound alone, kind of like portage foghorns, or audible GPS. It also tipped you off as to where to lift your back end so as to not look as inept as the guy making all the noise in front of you.

There’s an unspoken understanding among the portaging brotherhood that whoever’s wearing the canoe is King of the Trail. If you’re packing anything less, yield or suffer the righteous tongue-lashing of the guy with the canoe. When you’re carrying the canoe, your field of vision consists of your boots and about ten feet in front of them. At this point, you're a visually-impaired, oxygen sucking, one-man right-of-way.

Jim Landwehr enjoys writing creative non-fiction, fiction, and poetry. His poetry collection, Written Life, will be released by eLectio Publishing on March 31, 2015. His first book, Dirty Shirt: A Boundary Waters Memoir was published by eLectio Publishing in June of 2014. He has non-fiction stories published in Neutrons/Protons, Parody Magazine, Boundary Waters Journal, Forge Journal and MidWest Outdoors Magazine. His poetry has been featured in Verse Wisconsin, Torrid Literature Journal, Echoes Poetry Journal, Wisconsin People and Ideas Magazine, the Wisconsin Poets Calendar, Off the Coast Poetry Journal, and many others. Jim lives and works in Waukesha, Wisconsin, with his wife Donna, and their two children, Sarah and Ben. Jim works as a geographic information systems analyst for the Waukesha County Department of Parks and Land Use. Find out more about his writing at www.jimlandwehr.com