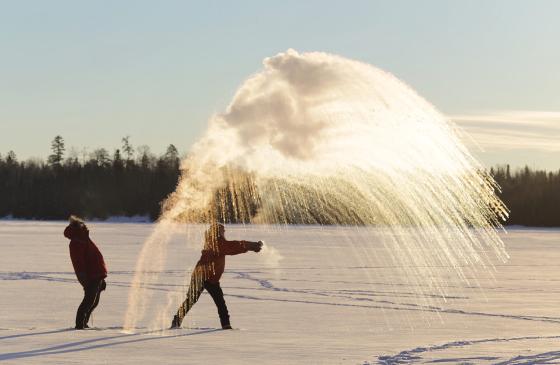 This is our tenth year working around the clock to protect the Boundary Waters from the threats of sulfide-ore copper mining proposed next to the Wilderness. In September 2013, our national coalition - called the Campaign to Save the Boundary Waters - was formed to create a national movement to protect this one-of-a-kind landscape from America’s most toxic industry: sulfide-ore copper mining. It is organized, led, and funded by Northeastern Minnesotans for Wilderness (NMW).

​​Today, NMW is the largest conservation organization in Minnesota that focuses on protecting and preserving the Boundary Waters and greater Quetico-Superior region.

We are uniquely focused in our efforts to permanently protect the Boundary Waters from toxic copper mining and fight it on multiple fronts, including through litigation, science, and research, political advocacy, engagement with a diversity of stakeholders and user groups, generating national awareness, and organizing volunteers, donors, and supporters.

We are in this for the long haul -  we won’t stop fighting for the Boundary Waters Canoe Area Wilderness ecosystem until it is permanently protected from toxic sulfide-ore copper mining, and we are well on our way.

Here are some of the major wins you helped us accomplish in 2022:

In June, the US Forest Service released a draft environmental assessment (EA) for a proposed 20-year ban on sulfide-ore copper mining, called a "mineral withdrawal," on 225,504 acres of federal lands and minerals in the watershed of the Boundary Waters. We await the final environmental assessment and are hopeful for a good decision from the U.S. Secretary of Interior on the proposed 20-year mining ban on federal public lands around the Boundary Waters.

In January, the Campaign to Save the Boundary helped organize partners and supporters to submit over 249,000 comments to the U.S. Forest Service after a 90-day comment period supporting the 20-year ban. This is quite a significant number of comments submitted by Save the Boundary Waters and its partners, as it eclipses the 181,000 comment mark from a prior federal application in 2017. 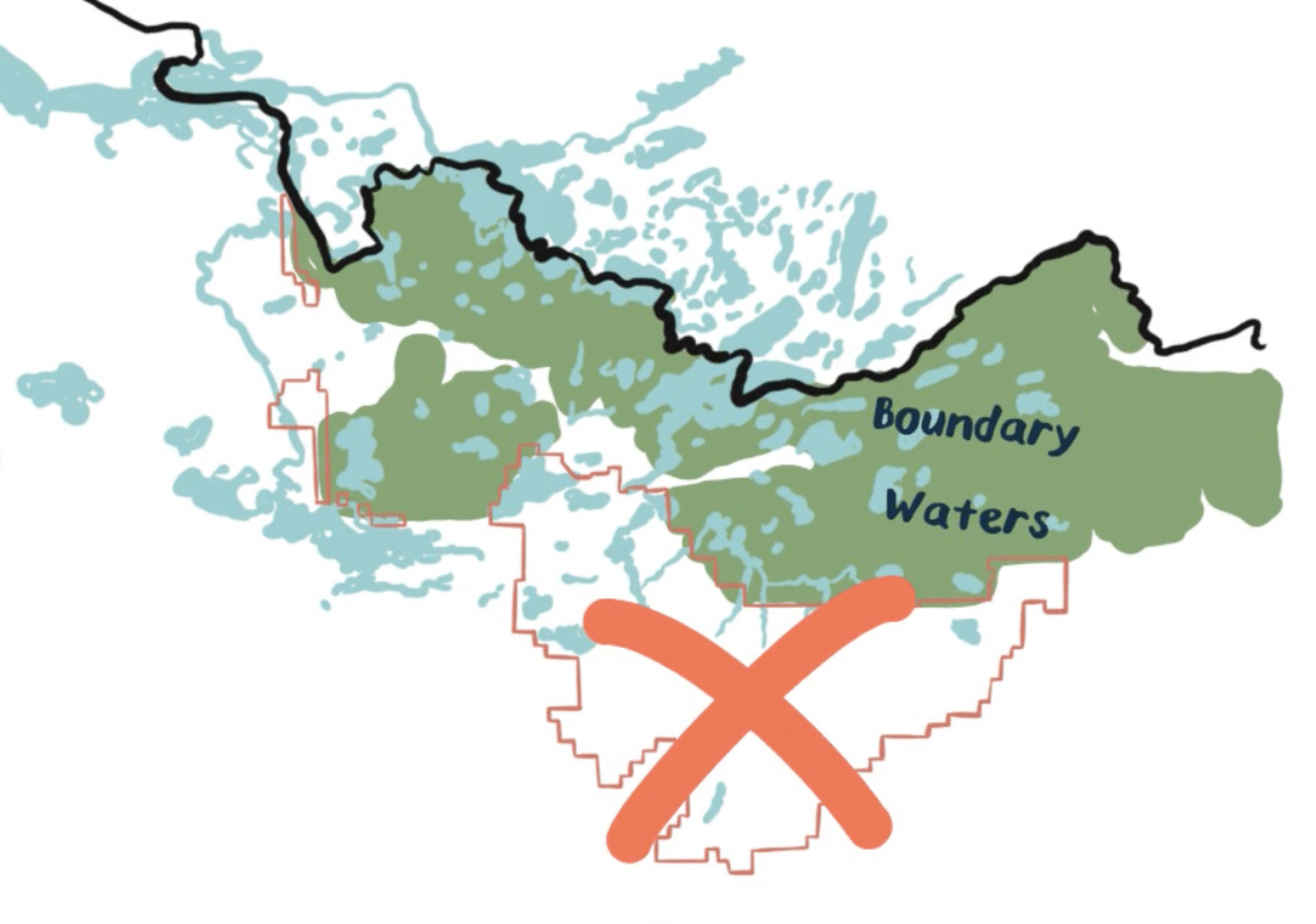 On January 26, 2022, the Biden administration announced that it canceled two unlawfully renewed mineral leases for sulfide-ore copper mining next to the Boundary Waters. The Department of Interior (DOI) said it determined that the expired Twin Metals leases were unlawfully renewed by the prior administration. This renewal violated federal laws and regulations, including the legal requirement that the U.S. Forest Service must consent to mineral leases. In 2016, the U.S. Forest Service withheld its consent to the Twin Metals leases because of the risk to the Boundary Waters; this decision still stands. The federal Bureau of Land Management (BLM) also rejected all pending applications for more mining rights in the watershed. 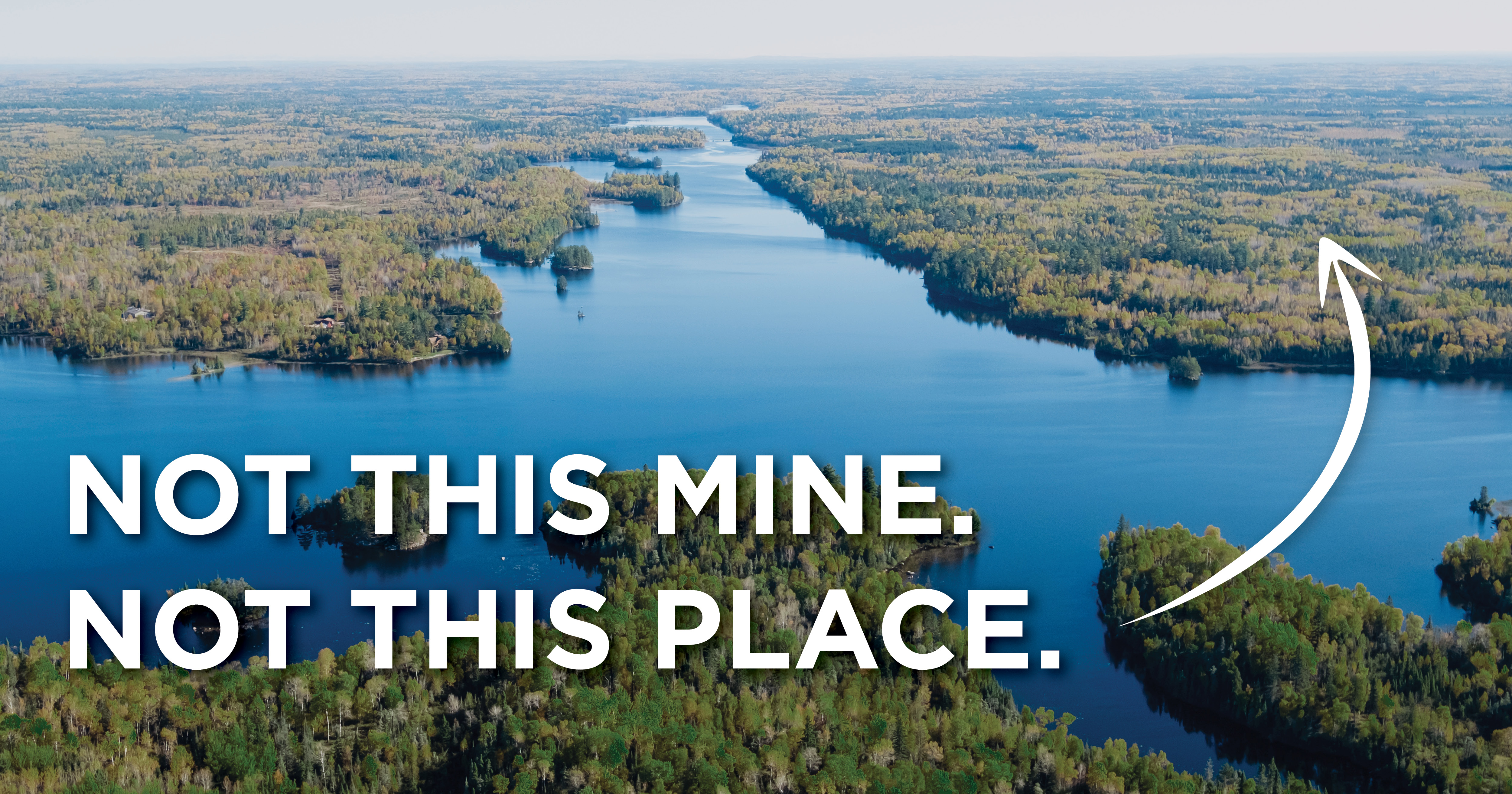 3. Rejection of Twin Metals mine plan of operation by the federal BLM and by the MN DNR

In December 2021, the federal BLM rejected a Twin Metals mine plan. In February, the Minnesota Department of Natural Resources ended consideration of the Twin Metals mine plan citing the loss of federal leases and, importantly, its concerns about Twin Metals’ plan to store hundreds of millions of tons of toxic waste on state public lands located on the shore of Birch Lake, which flows directly into the Boundary Waters.

4. Our work on the ground in Washington, DC

The last few weeks have been incredibly busy as we’ve worked the halls of Congress in DC for Rep. McCollum's Boundary Waters Permanent Protection bill. This year alone, we had over 300 meetings in DC, bringing 81 people from across the country to meet with elected officials, including US House and Senate offices.

In June, the Kids for the Boundary Waters made their first trip back to Washington, D.C., since 2019! We had 37 kids from 10 states tell their stories and meet with lawmakers supporting Rep. Betty McCollum’s bill. 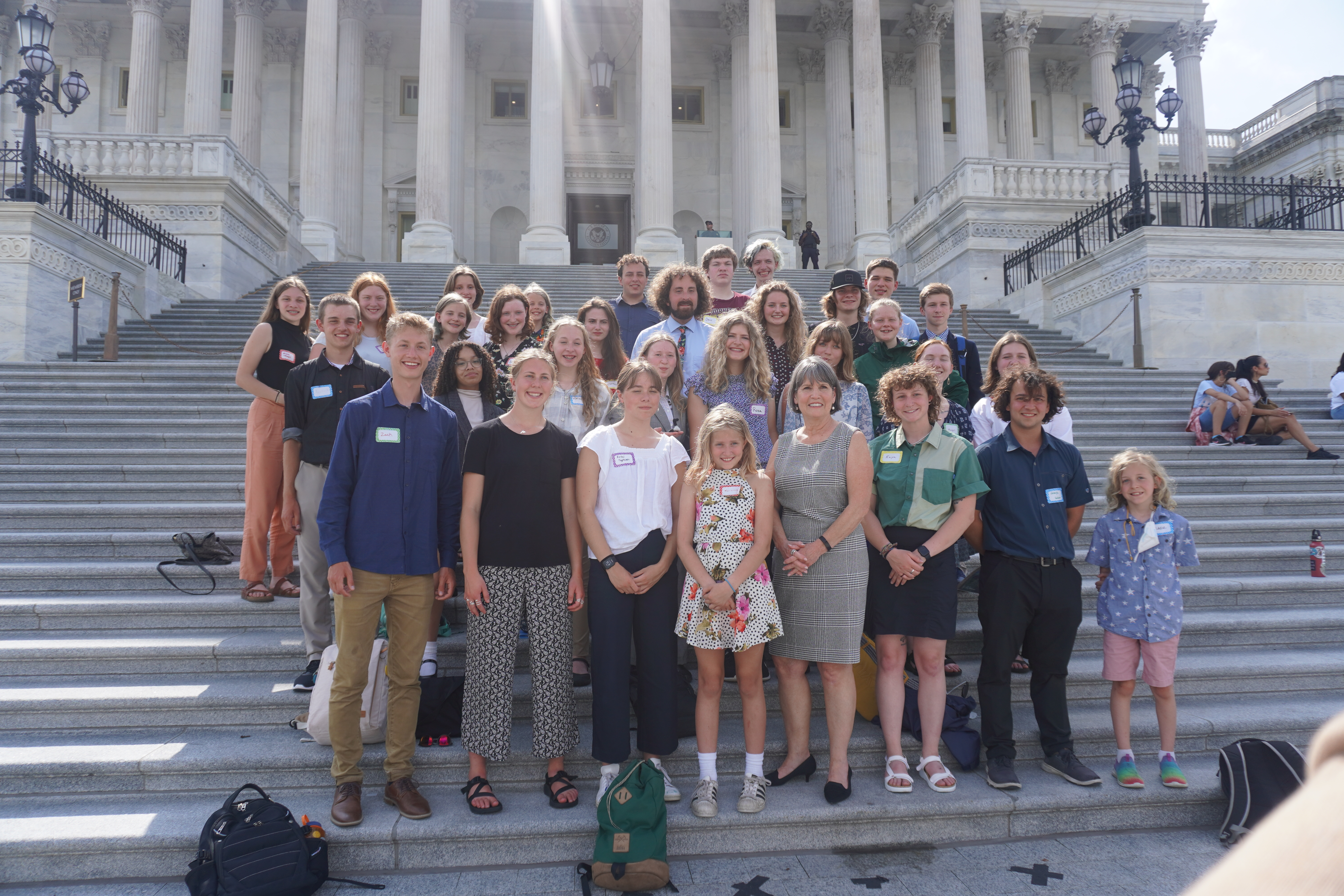 In July, the House Natural Resources Committee voted Rep. Betty McCollum's Boundary Waters Protection and Pollution Prevention Act (HR 2794) out of committee. The bill permanently protects 234,328 acres of federal land and waters within the Superior National Forest from risky sulfide-ore copper mining. The area protected by the bill is in the watershed of the Boundary Waters Canoe Area Wilderness.

Unfortunately, Congressional leadership did not agree to include any major public lands and conservation bills in the 2022 year-end legislative packages. However, because of our momentum, we are well-positioned to keep working for permanent protection at the federal and state levels through our multiple strategic pathways.

Though we did not achieve our most ambitious 2022 goal of passing the federal bill, we will doggedly pursue it moving forward. As our partners at Outdoor Alliance put it, “Conservation bills, in particular, can take years, even decades, to complete, and every time they get closer to passing, it becomes easier to pass them the next time around. Every time we advocate so hard that these bills approach the finish line, we make the runway a bit smoother for the next time we push.”

In 2022, we’ve been expanding our reach to new audiences through new social media platforms, digital ads and print ads, and more. Some of these efforts include billboards, bus ads, and strategic partnerships with influencers on TikTok that helped generate over 100,000 actions alone! 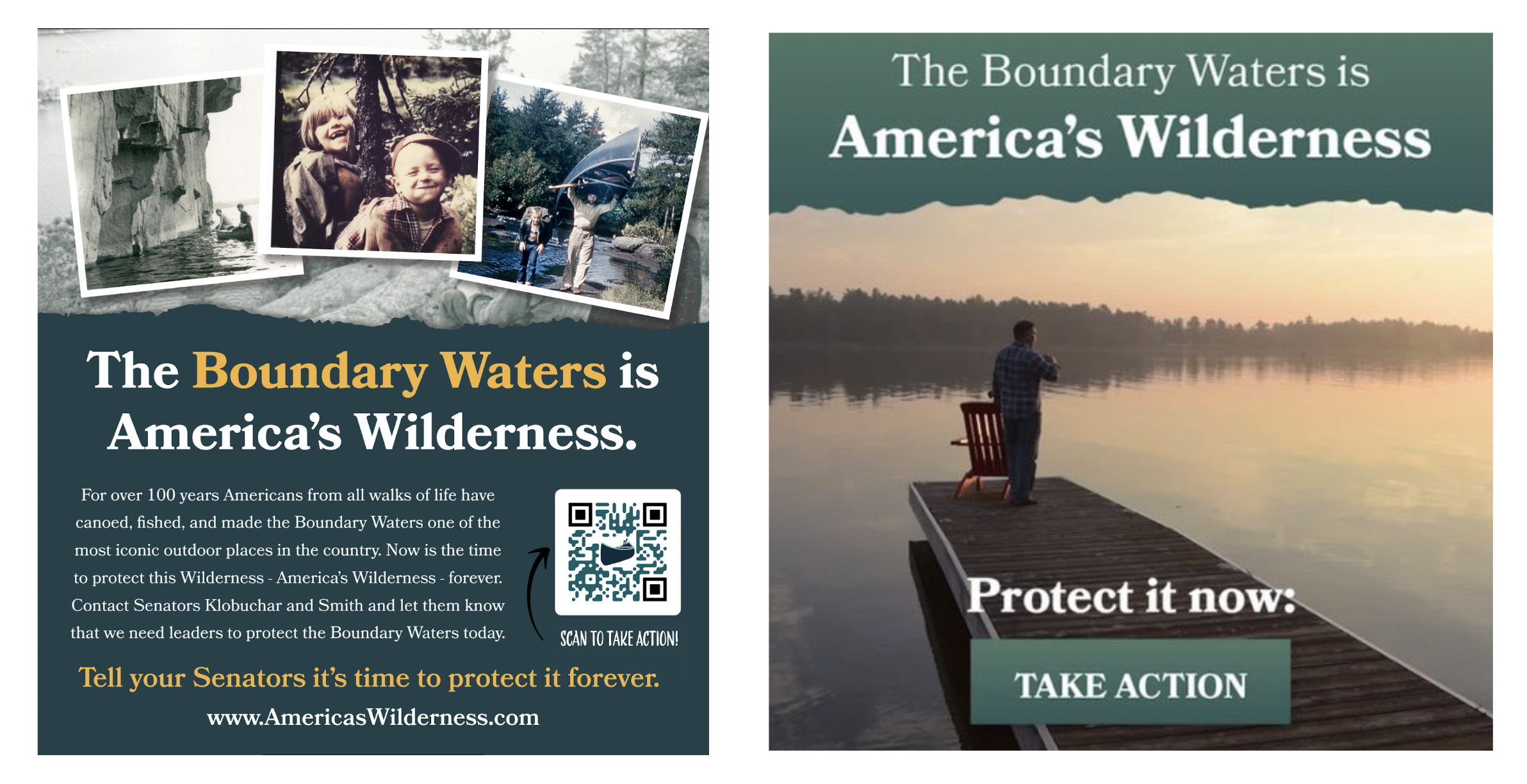 The America’s Wilderness Project is one of our paid communication and media campaigns focused on strategic and persuasive messaging in the form of social media marketing, targeted advertising, and widespread and varied methods of distribution. Using imagery and messaging focused on nostalgia and Minnesota traditions, it targets elected officials to take action for the Boundary Waters.

Over 8 million impressions across digital, print, and our bus advertisements!

BOUNDARY WATERS FOR ALL

Protecting this place from destruction and removing barriers to access will ensure all people can continue to enjoy and steward it for generations to come. In the second year of our Diversity, Equity, Inclusion, and Justice small grants program we supported 8 Boundary Waters trips or projects for people and groups too often excluded from the outdoors and conservation advocacy. We support and partner with many of the camps and access groups in our region that are part of this Boundary Waters community. Learn more.

Protecting the Boundary Waters from a giant foreign mining conglomerate with terrible environmental and human-rights records takes a lot of hard work. 2023 is sure to be a busy year for  the Campaign to Save the Boundary Waters, and will include:

This December, NMW, four conservation groups, and ten Boundary Waters businesses filed their motion to intervene in the Twin Metals lawsuit that challenges the actions of the Biden Administration to protect the Boundary Waters. Our lawyers have filed a motion to dismiss the Twin Metals lawsuit following a similar motion by the Biden Administration Department of Justice.

Although we did not achieve our most ambitious goal of 2022 - the passage of Congresswoman Betty McCollum’s legislation that would have permanently banned mining on 234,000 acres of federal lands and minerals in the watershed - we are optimistic that 2023 will see the announcement of a 20-year ban by the Biden Administration Interior Department. A 20-year ban would be a credible stepping stone to permanent protection.

Our plan is strategic and sound, but we need to fund it - now and into the future.
Can we count on you? 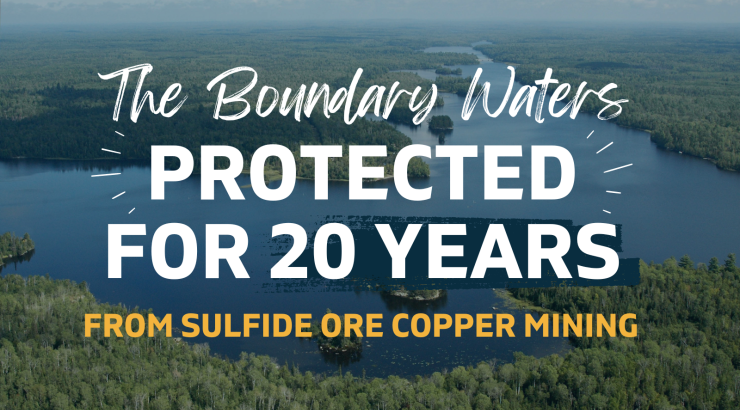 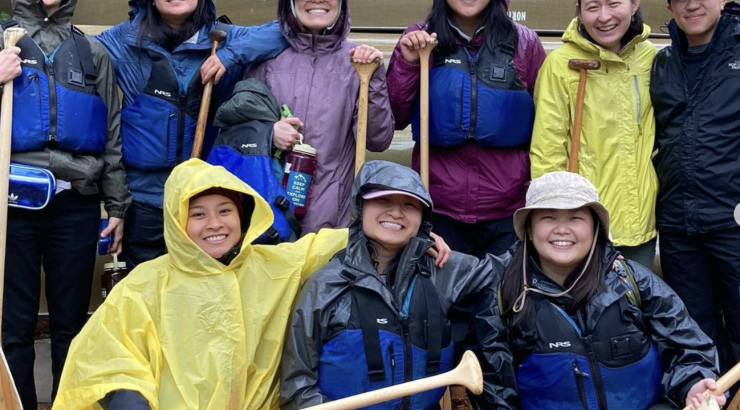