If one of the world’s largest foreign mining companies shakes your hand and says it wants to do you a huge favor, you’d better count your fingers.

On July 18, 2019 Antofagasta’s Twin Metals, which proposes to build a sulfide-ore copper mine next to the Boundary Waters – put out a press release.  Let’s be clear about what Twin Metals’ announcement really is:  a huge admission and a massive set-back for the proposed mine project. 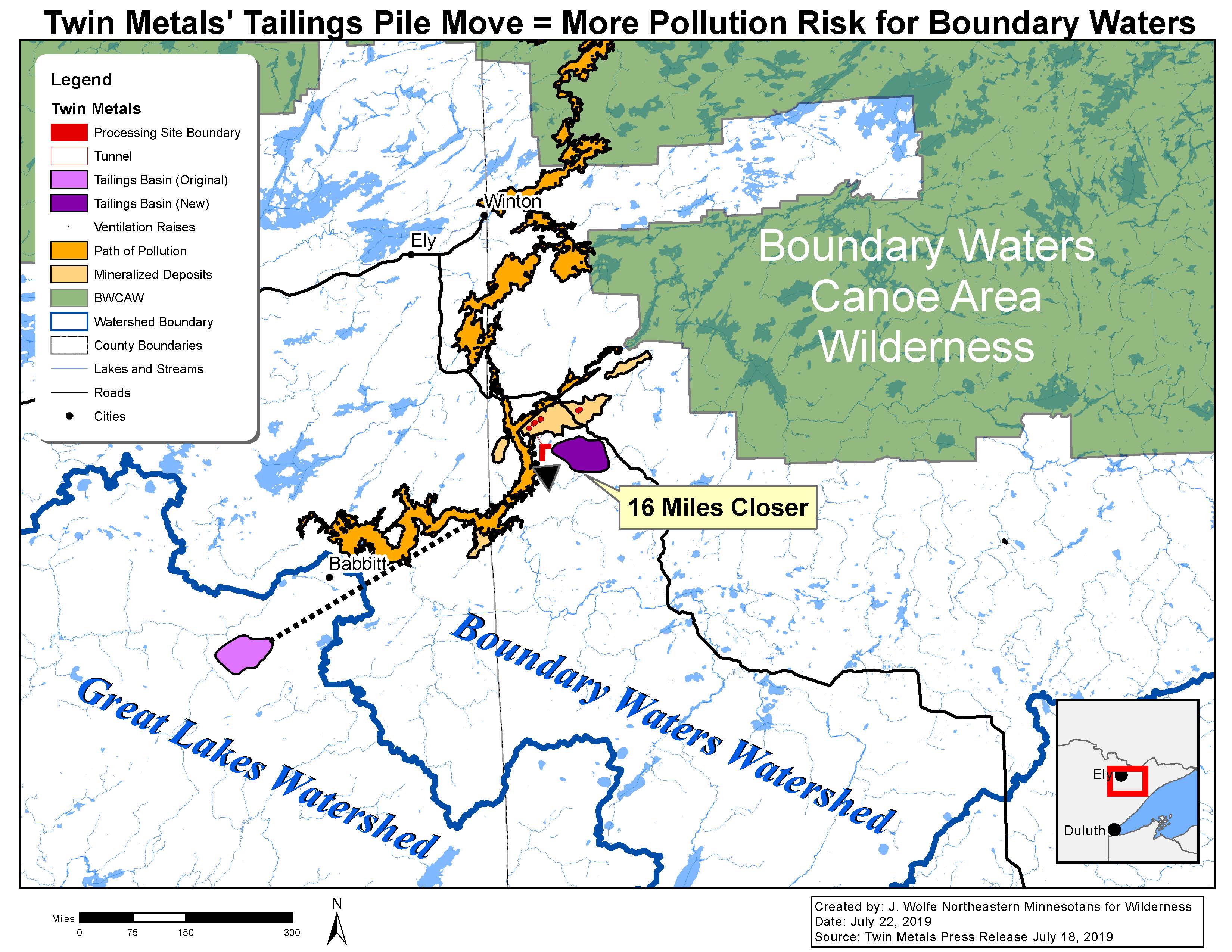 Here are 4 key things to know about Twin Metals’ announcement:

Dry-stacking was the original method of tailings storage that was proposed in the October 6, 2014 preliminary feasibility study[1], for the Twin Metals project.

Why would it make a show of announcing this method of tailings storage?  It had another aim in mind.

2. In its press release, Twin Metals intentionally buries the lede.

The lede is not about how it would handle its tailings, it's about where Twin Metals wants to store them. Twin Metals just admitted (see its press release, paragraph #2) that it wants to move the proposed location of its mining waste 16 miles north to a location within a few miles of the Boundary Waters, to an area of lakes and rivers that drain into the Wilderness.

Now Twin Metals admitted to breaking that promise. Twin Metals' original plan to pump its tailings into the Lake Superior watershed will not work or be allowed.  This is bad news for Twin Metals and it knows it, but now it has to admit it will be dumping mountains of mine waste in the Boundary Waters watershed.

With no other options, the company’s PR team used smoke and mirrors to distract, just as a magician would, from what it is actually planning to do:  permanently dump billions of tons of sulfide-ore copper mining waste in the headwaters of the Boundary Waters Canoe Area Wilderness and Voyageurs National Park.

3. No technology in existence now or on the horizon – including dry-stacking – can prevent a sulfide-ore copper mine in this location from polluting surrounding groundwater and surface water, including the Boundary Waters.

A 2014 study[2] conducted by geophysicist Dr. David Chambers warns “[i]t is not feasible, given today’s or tomorrow’s technology, to reduce the risk of impacting waters downstream from a copper/nickel mine in a sulfide ore body to zero.” The study showed that no tailings storage facility seepage collection system is perfect; “all liners leak.” This is a big deal considering the downstream waters receiving the would-be pollution are protected under the highest “zero degradation” standard under the federal Clean Water Act.[3]

The science corroborates the conclusion of former Forest Service Chief, Tom Tidwell, in the 2016 US Forest Service decision letter[6] to the Bureau of Land Management denying the renewal of Twin Metals’ mineral leases:

I find unacceptable the inherent potential risk that development of a regionally-untested copper-nickel sulfide ore mine within the same watershed as the [Boundary Waters] might cause serious and irreplaceable harm to this unique, iconic, and irreplaceable wilderness area.

4. Dry-stacking Twin Metals’ tailings will not eliminate the risk of perpetual mining pollution flowing to the Boundary Waters.

Dry-stacking mining waste is not a panacea.  In dry-stacking, a company reduces water content of the tailings to around 15%, and dumps them onto a liner.  Then the mining company compacts the tailings in the hopes of inhibiting rainwater and snowmelt from soaking in and re-hydrating the tailings.  Dry tailings degrade air quality with fugitive dust, which the Minnesota Department of Natural Resources has said may contain heavy metals, sulfur, and fine particulates.  There are also other risks, as well.

First, there will be toxic seepage from the tailings. Twin Metals would have to build a perpetual seepage collection and treatment system, which means pipes, pumps, valves, and holding tanks, all of which eventually break, leak, rust-through, freeze and burst, or fail in other ways.

Second, all liners, even the best ones, eventually leak,[7],[8] and Twin Metals can only treat the pollution it catches.  Tailings leachate that escapes the liner will go untreated and make its way through groundwater to surface waters.

Third, a dry tailings facility can fail if it is re-saturated.  The Boundary Waters watershed receives 30 inches and more of rain and snowmelt each year, and severe rain events are increasingly frequent.  This wet environment poses a high risk that Twin Metals’ tailings pile will re-hydrate.  Minnesota regulators warn of serious pollution consequences if that happens.[9]  This risk is heightened in Twin Metals’ case because the mining company proposes to use topsoil, rather than a plastic or other waterproof liner, to cover its tailings.  Topsoil will allow rain and snowmelt to infiltrate the tailings pile.  Twin Metals’ own website (e.g., saying that its “tailings can safely be exposed to air and water”) suggests that it understands the risk of its tailings re-hydrating.

Fourth, Twin Metals says that it won’t build a tailings dam to hold back its tailings, saying it’s not necessary.  If and when the tailings pile re-hydrates, however, there will be no dam to stop the tailings pile from failing catastrophically – in an area of lakes, streams and rivers that flow into the Boundary Waters.

Donate today to help us protect the Boundary Waters!

[1] Twin Metals Minnesota Project NI 43-101 Technical Report on Pre-Feasibility Study, see sec. 24.2.8 on p. 24-13,
“Further consideration of paste and/or dry-stack tailings management is recommended to improve dam safety permitting feasibility for this facility as it will be located near local population centers.”

[3] 40 CFR §131.12. The federal Clean Water Act provides anti-degradation standards meant to keep clean water clean. Minnesota, as a delegated State, must have an antidegradation program that protects these outstanding national resource waters, so-designated because they have unique characteristics to be preserved (e.g., waters of exceptional recreational, environmental, or ecological significance), and no degradation is allowed.

[7] Chambers, David M. “The Potential for Acid Mine Drainage and Other Water Quality Problems at Modern Copper Mines Using State-of-the-Art Prevention, Treatment, and Mitigation Methods.” Center for Science in Public Participation, November 2014
[8] In the Federal Register (May 26, 1981, pp. 28314 through 28328), the EPA argued forcefully that all landfills will eventually leak.  “[T]he existing technology for disposing of hazardous wastes on or in the land cannot confidently isolate these wastes from the environment forever."
[9] The Minnesota DNR has stated that “[d]ry stacked tailings that become wet again … are subject to oxidation and leaching. As precipitation then intermittently washes through tailings, those heavy metals and other [pollutants] may be washed into surrounding soils and nearby water bodies.”