If you’ve attended a Campaign to Save the Boundary Waters presentation or read any of the Campaign’s materials, you’ll notice our tight focus on the Boundary Water Canoe Area Wilderness and Voyageurs National Park watershed. A watershed can be a difficult concept to grasp, as the boundaries aren’t searchable in Google Maps, let alone marked on a traditional highway map. Understanding the watershed boundary--and what it means for the direction of water flow--is crucial to understanding the risks posed to the Boundary Waters and Voyageurs from sulfide-ore copper mining. 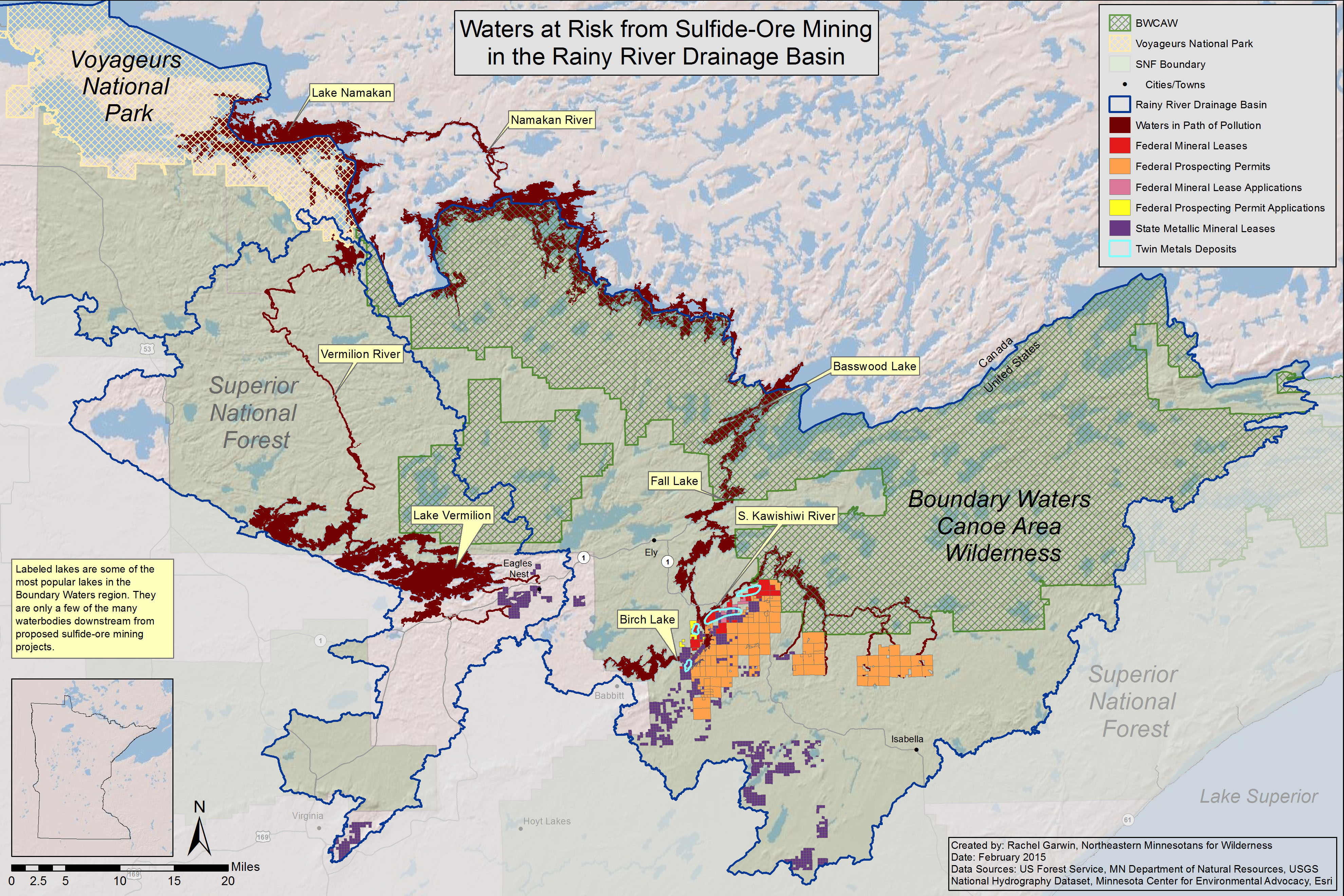 What is a watershed?

A watershed is defined as all of the land that drains to a specific point, like the drain of a bathtub. At a more complex level, an urban sewer grate’s watershed is comprised of all of the gutters, sidewalk, streets, driveways and grass strips that flow into it. Small streams tend to have small watersheds that build upon each other as small streams combine to form larger streams and rivers. Thus the whole state of Minnesota can be seen as layered watersheds of different sizes, much like neighborhoods combine to form towns, which form counties, which form the state. The Minnesota Pollution Control Agency (MPCA) defines 81 major watersheds in the state, and it recently released a great interactive map of them.

How is the Boundary Waters & Voyageurs watershed defined?

Three major watersheds flow into the Boundary Waters and Voyageurs National Park, according to the MPCA’s map: Rainy River - Headwaters, Vermilion River and Rainy River - Rainy Lake. The Campaign calls the three major watersheds that flow into the Boundary Waters the “Rainy River Drainage Basin.” To delineate these watersheds, hydrologists rely on advanced mapping software and digital elevation models to predict in which direction a drop of rain will flow at any given point. These maps and models form the basis of the MPCA’s 81 major watersheds, which agree with the U.S. Geological Survey’s National Hydrography Dataset (though the names differ slightly). These authoritative maps provide clear boundaries within which acid mine drainage would flow toward the Boundary Waters and Voyageurs, threatening their interconnected lakes, rivers and wetlands.

Why do the watersheds matter?

One of the primary risks from sulfide-ore copper mining is the leaking or spill of acid mine drainage--which can include sulfuric acid, toxic heavy metals and sulfates--into the rivers and streams around the mine, as well as into the groundwater which then connects to surface water. Some of the contaminants present in acid mine drainage can travel large distances downstream from their original source. Simulations of realistic contaminant releases show that the contaminants could reach the Boundary Waters from the proposed Twin Metals mine site, on the shores of Birch Lake. Pollutants from proposed sulfide-ore mines near Eagles Nest, Minnesota, could also reach Voyageurs by flowing through Lake Vermilion and down the Vermilion River.

Mines located among headwaters also have a larger regional impact than previously thought. By comparing indicators of fish health in streams in the Southeast, Midwest and Northeast with the density of mines in their headwaters, a team of researchers from Michigan State University, Oregon State University and the U.S. Geological Society found that the presence of even one mine was a source of regional stress whose impacts to fish health are felt much farther down the watershed than sampling immediately around the mine site would indicate.

From this perspective, then, the Boundary Waters and Voyageurs watersheds must be kept free of potential sources of acid mine drainage in order to prevent the potential for harm to their beloved lakes, streams and wetlands.