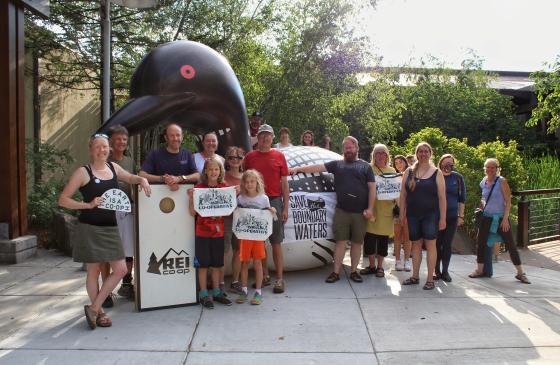 The coalition for permanent Boundary Waters protections grew even stronger in the last month, as major outdoor retailer REI Co-op and Save the Boundary Waters announced a new level to their long-standing partnership, just in time to work for Congressional action to ban sulfide-ore copper mining near the Wilderness this year.

To celebrate our partnership, as well as the release of a major draft environmental study from the Forest Service, we held a Wilderness Action Day at the REI Bloomington Flagship store on Friday, June 24. The event included multiple Boundary Waters action opportunities,  giveaways from REI, and a screening of the Webby Award-winning film Boundary Waters Traverse with a Q&A from Campaign Manager and trail-runner Alex Falconer.

Near the conclusion of the event, REI announced that it had awarded our Campaign a $10,000 grant — thank you so much to REI for supporting this fight for a permanently protected Boundary Waters!

REI is also encouraging its members to send a message to members of Congress urging passage of permanent Boundary Waters protection through its new Cooperative Action Network. Have you taken action yet?