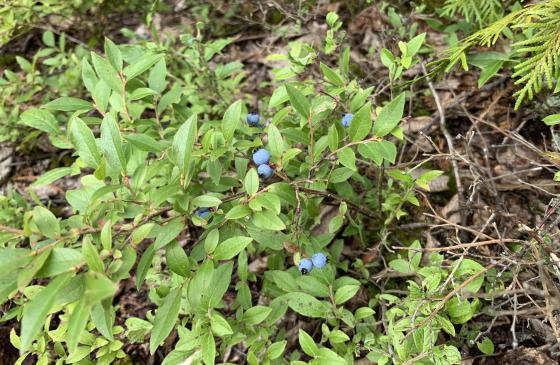 If you’ve ever been to the Boundary Waters during the later months of summer, you’ve likely indulged in one of the region’s tastiest wild treats: Blueberries.

Looking to learn about what makes this berry so widespread in the region and some of its best uses? Read on to learn more about the ecological role of wild blueberries, their use within indigenous communities, and how to make the most of what you pick.

Where do wild blueberries grow and what eats them?

Wild blueberries grow plentiful throughout the eastern and northern United States, but in Minnesota, they’re most concentrated in the northeast region because they need acidic soil to flourish, making the acid-rich coniferous forests of the area a fantastic place to grow. These fruits begin to ripen in mid-July and reach their peak toward the end of the month and into August.

Wild blueberries appear almost exactly like the store-bought kinds, (though often slightly smaller!), making them an easy-to-identify fruit that’s safe to forage. However, make sure to check the interior of a berry before you start picking, as the blue bead lily produces a lookalike berry that can be identified by its white interior. This berry should not be eaten.

Many animals within the ecosystems of northeastern Minnesota snack on blueberries, but deer and bears are the animals known to heavily incorporate berries into their diets. However, recent research suggests that wild blueberries also play a role in the diets of northeastern Minnesota’s wolf population! Click here to see footage of this behavior from Voyageurs Wolf Project.

How have indigenous communities used blueberries?

Indigenous people have utilized blueberries as more than a snack for centuries. Wild blueberries are an essential part of pemmican, the original power food bar, according to the Smithsonian. The traditional style of baking pemmican involves drying out wild blueberries, combining them with dried proteins and tallow, and baking the cakes in the sun. These bars are highly portable and nutritious, as well as easily storable, which made them a valuable winter resource.

Wild blueberries have also been documented as an oft-utilized medicine. Research from Purdue University outlines how the blueberry and its genetic relatives can make for effective natural remedies against coughs, sore throats, and as heart medicine.

How can you responsibly pick blueberries?

Grabbing every berry you see is tempting, but picking a bush clean can have unintended ecological consequences and make it harder for everyone to get in on the fun. Be sure to never pick the last berry on a bush, and utilize common impact reduction practices like only taking what you know you’ll eat.

What can you make with the blueberries you’ve picked?

Eat them as is!

Sometimes the most straightforward way is the best one. Simply rinse off your berries with a splash of water and eat while you pick!

Make a spread for your breakfast.

Mash up your blueberries in a bowl using the back of a fork and spread over your morning bagel or toast for a delicious jam. To sweeten things up a bit, add sugar to taste.

Add them into your pancakes.

Whether you’re at the cabin or in the Wilderness, adding blueberries into your pancake mix is a classic way to incorporate yesterday’s haul into this morning’s breakfast.

Blend them into a smoothie.

If you’re looking to cool off during a warm day and have access to a freezer, freeze your blueberries and blend them into a smoothie with your other favorite ingredients to make a perfect summer treat.