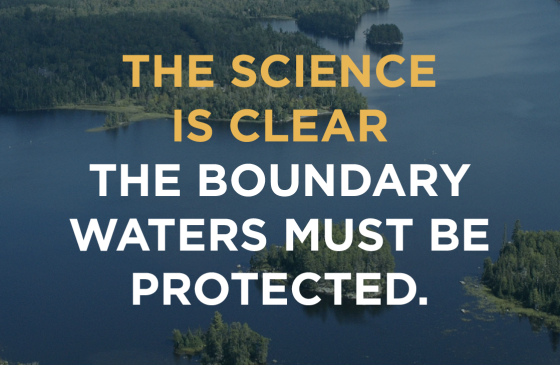 "The environmental assessment released today provides a strong scientific foundation for a 20-year ban on copper mining near the Boundary Waters," said Becky Rom, National Chair for the Campaign to Save the Boundary Waters. "It is deeply rooted in peer-reviewed science, law,  and established federal public lands policy, and validates the concerns of local residents and the American people about the risk sulfide-ore copper mining poses to the Wilderness. It is clear beyond a shadow of a doubt that the watershed of the Boundary Waters is the wrong place for this risky type of mining."

The release of the draft EA will be followed by a 30-day comment period. Following agency review of comments, the EA will be finalized and handed to the Bureau of Land Management, which will summarize and deliver it to the desk of Interior Secretary Deb Haaland for a decision.

Since 2016 there have been 397 days of public comment, 8 listening sessions, and over 500,000 written comments in favor of protecting the Boundary Waters from the threat of copper mining.

In addition to providing the scientific basis for the 20-year mineral withdrawal, the maximum time allowed by administrative action, the EA provides the foundation for Rep. Betty McCollum's Boundary Waters Protection and Pollution Prevention Act, which would make the withdrawal permanent. According to the Star Tribune, U.S. Senators Tina Smith and Amy Klobuchar were waiting for the release of the study before committing to a Senate companion for Rep. McCollum's legislation.

In January, the Department of Interior terminated two federal mineral leases for Chilean mining conglomerate Antofagasta's Twin Metals project, after determining they had been unlawfully renewed. Antofagasta proposed a massive underground mine on the edge of the Boundary Waters along lakes and streams that flow directly into the Wilderness. Twin Metals and Antofagasta were widely criticized for providing misleading information during a hearing on Rep. McCollum's legislation last month.

The Boundary Waters is the most heavily visited wilderness area in the United States, attracting more than 160,000 visitors from all over the world and is a major driver of the regional economy, supporting hundreds of businesses and thousands of jobs. A peer-reviewed independent study from Harvard University showed that protecting the Boundary Waters from a proposed Twin Metals sulfide-ore copper mine would result in dramatically more jobs and more income over a 20-year period. Nearly 70 percent of Minnesotans support permanent protection for this priceless Wilderness area.