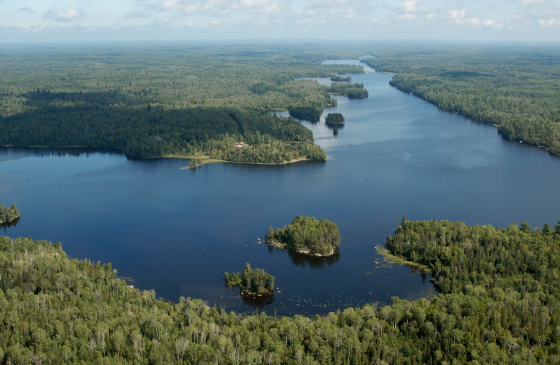 “The Boundary Waters Canoe Area Wilderness is recognized the world over for its pristine waters, unique ecosystems and stunning beauty. Let’s permanently protect this watery wilderness before it’s too late and we’ve lost it forever,” said Senator Kelly Morrison.

“I am thrilled to be the chief House author of the Boundary Waters Permanent Protection Act. Passing this bill is essential to protect the economic, recreational, and ecological gem that is the Boundary Waters Canoe Area Wilderness. I’ve experienced the adventure of exploring the Boundary Waters with my family and want to ensure that all Minnesotans have the same opportunity for generations to come,” said Representative Sandra Feist.

Allowing copper mining in the headwaters of BWCAW would forever degrade the Wilderness’ ecosystem and landscape and result in polluted water and air, industrial-level noise, loss of habitat and wildlife, and damage to the regional amenity-based economy, all in violation of existing state and federal laws that mandate permanent protection of the BWCAW from such harms. The bill only applies to sulfide-ore copper mining and does not prohibit or otherwise impact existing or future taconite, iron ore, sand, gravel, and granite mining.

The Boundary Waters Permanent Protection Bill closes a critical gap in existing state and federal statutes that mandate the permanent protection of the BWCAW from any pollution, ecosystem alteration, and risk of degradation to its air, water, forested landscape, or other natural conditions.

Nearly 70 percent of Minnesotans support permanent protection for this priceless Wilderness area. A poll conducted by Change Research of Minnesota midterm voters finds that 7 in 10 (69%) support legislation to permanently protect Minnesota's Boundary Waters Canoe Area Wilderness from the threat of sulfide-ore copper mining. The poll of 1,098 2022 Minnesota voters from November 7-10, 2022 found that support for permanent protection ran high across all demographics and every region of the state.

A vast collection of peer-reviewed science shows that if a Twin Metals mine was built along the rivers and streams flowing into the Wilderness, pollution and environmental degradation would be certain. A peer-reviewed independent study from Harvard University showed that protection of the Boundary Waters from the proposed sulfide-ore mine would result in dramatically more jobs and more income over a 20-year period.

The Boundary Waters Permanent Protection Bill expands the existing ban on mining within the BWCAW to include the entire Rainy River Headwaters, of which the BWCAW is the downstream 50%. The Bill is supported by the Minnesota Pollution Control Agency's 2017 Rainy River-Headwaters Watershed Monitoring and Assessment Report, which describes the waters within the Headwaters as “immaculate." The Report concludes that "the majority of the waterbodies within this watershed had exceptional biological, chemical, and physical characteristics that are worthy of additional protection."